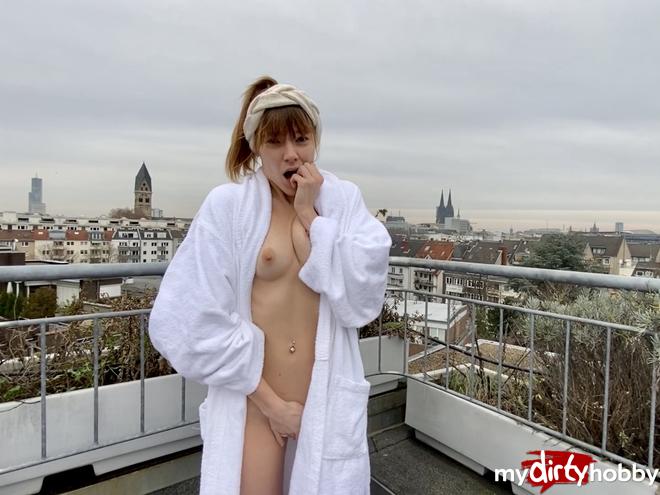 Ouh, I was trembling with nervousness, I never had sex in such a risky place! I hope we don't get caught. Actually it wasn't planned that way, but somehow it just happened ... I had invited my roommate to the Thermenhotel because I felt so alone. We had a little bit of fun and then he wanted to go straight back home, so I went down to the spa area to relax a little. After a little relaxation, I got the idea that I could show you the beautiful view of the roof terrace here. But when I got up there, I wasn't alone anymore ... I know him, right? It didn't take long and it only took a few looks, it was clear to us that with such a view you just have to do it together, hihii. Luckily we only had bathrobes on and were already naked underneath, which made everything a bit easier and faster if another hotel guest or something comes up. It took a little effort and courage, but it was worth it for this great feeling ...

Fierce! Squirter explosion during sex! (Anne-Eden)
Wow! It has never been so extreme, I have properly sexed during sex and made everything and everyone completely wet, hihii ... that was really cool, especially
Notgeil from the holiday! (Anne-Eden)
I hope I was not too wild, but I just could not suppress my lust ... and then came the sperm ... oh dear. Finally I'm back home and I can let my lust for sex
Three caught! Stepbrother fucked in the shower! (Anne-Eden)
Something has not happened to me and so I went into the shower without any idea, without completing the door, as usual hihii. I could not know that I would
A slightly longer shortcut to the Christmas market! (Anne-Eden)
I'm so excited, my best friend from the past is in town for a few days. We want to go to the Christmas market together. Luckily it's not too far into the city,
My first time outdoor & caught again! (Anne-Eden)
An old friend of mine .... has recently moved. He told me that he now has a roof terrace ... I am so jealous and have to watch them live ... hihii. Now I'm up